From Members, Important People And Organizations 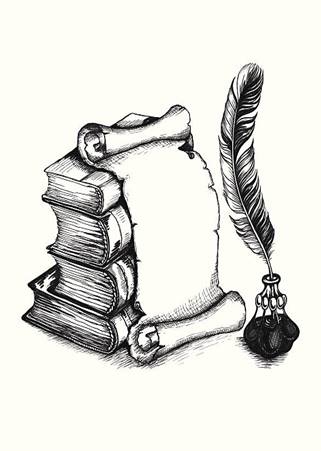 "The pen is mightier than the sword"

As you know sister Chisom, GM Duncan was a loyal friend and member of the World Head of Family/Sokeship Council when he was alive. His contribution to the martial arts & in particular NinJutsu is legendary & forever secured in history!

Yes Sir, thank you for being a friend, he treasured the organization and his membership.

"There are spirits that come to fulfill missions for many in this world; This is undoubtedly the case of our beloved Soke Frank Sanchez, who through his martial teachings and his circle of Masters and friends, has been leaving a deep mark on others. I salute that spirit and that person!" 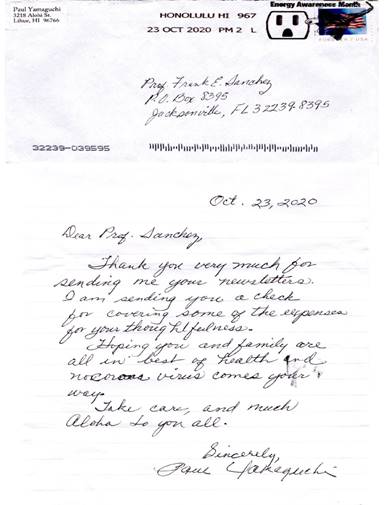 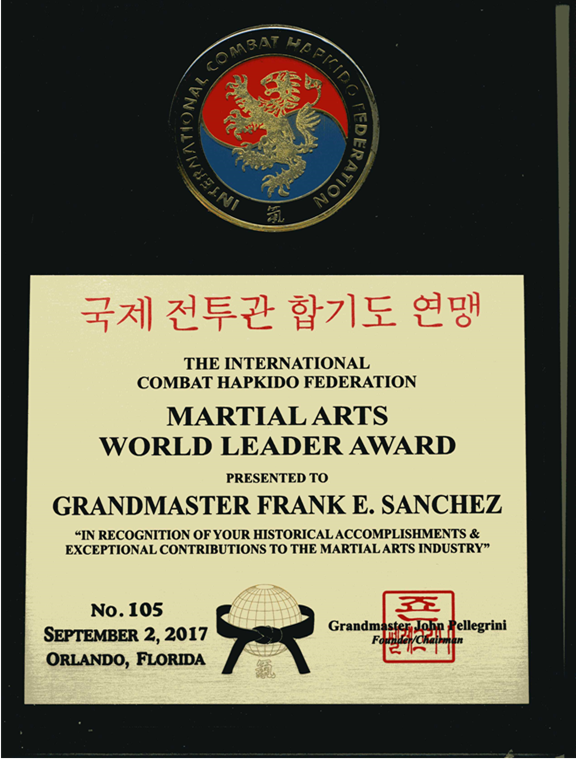 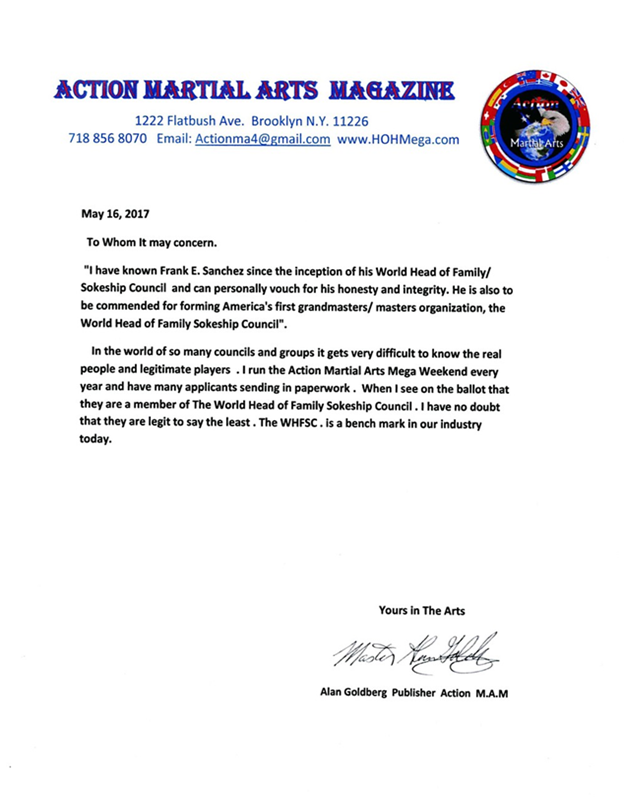 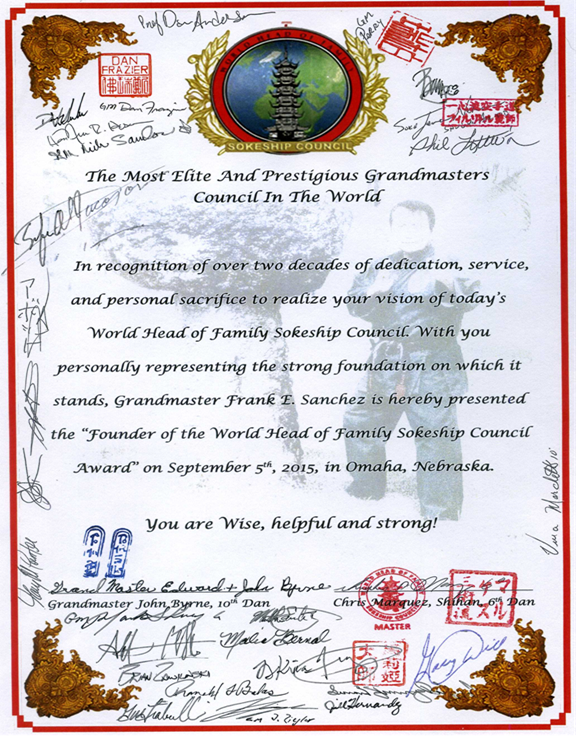 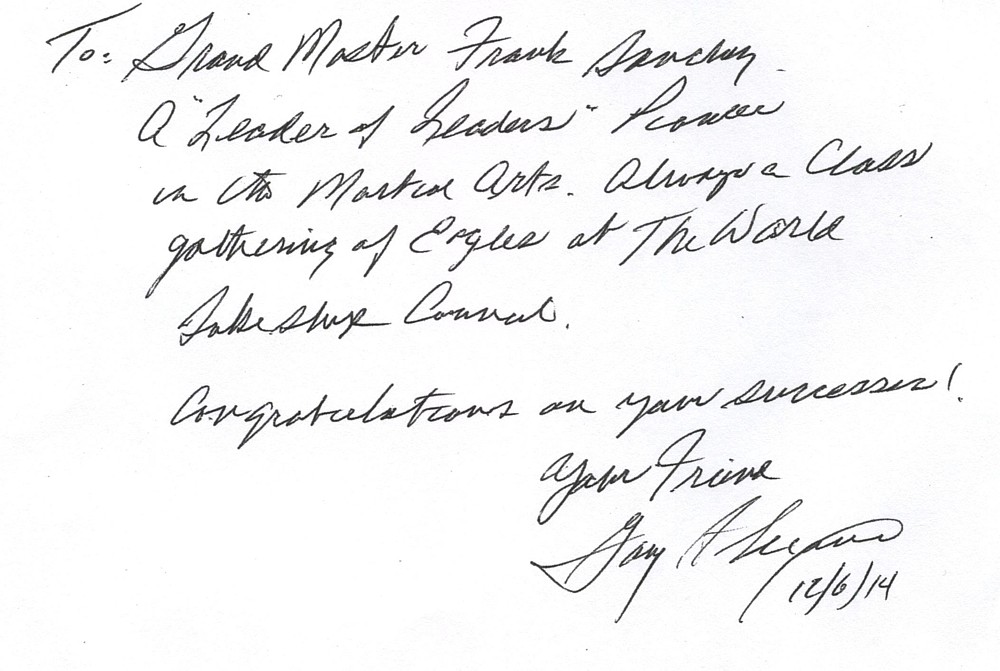 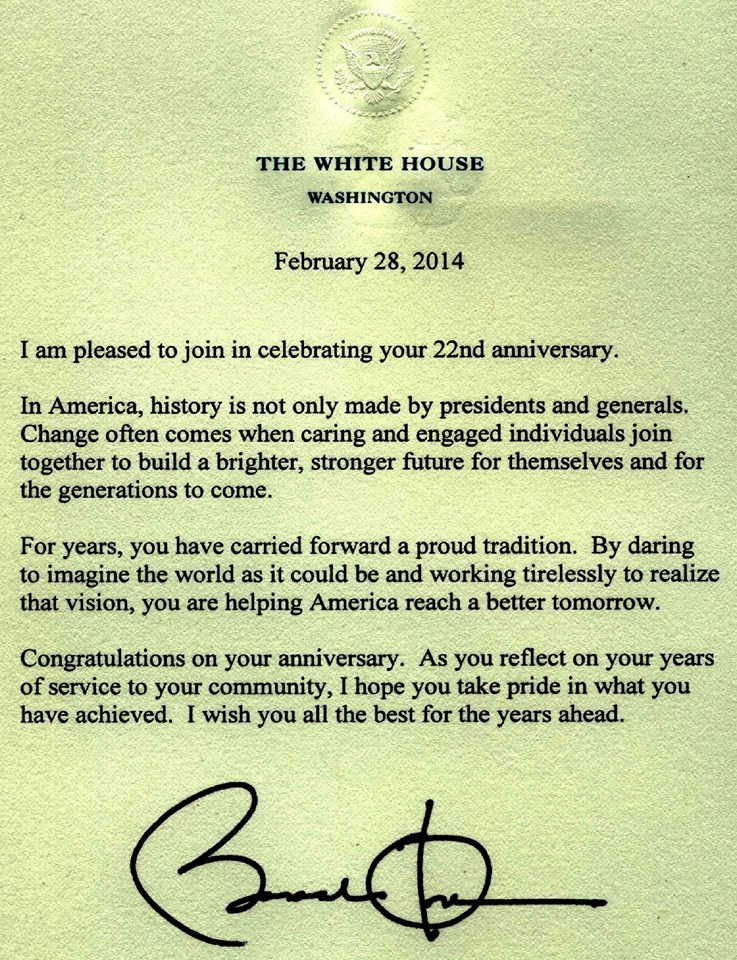 NOTE: Letter of congratulations sent in reference to the WHFSC's 22nd Anniversary in 2014 by then President, the Honorable Barack Obama

(It should be noted that the World Head of Family/Sokeship Council is non-political. It holds no allegiance to any one party of the U.S. Government.} 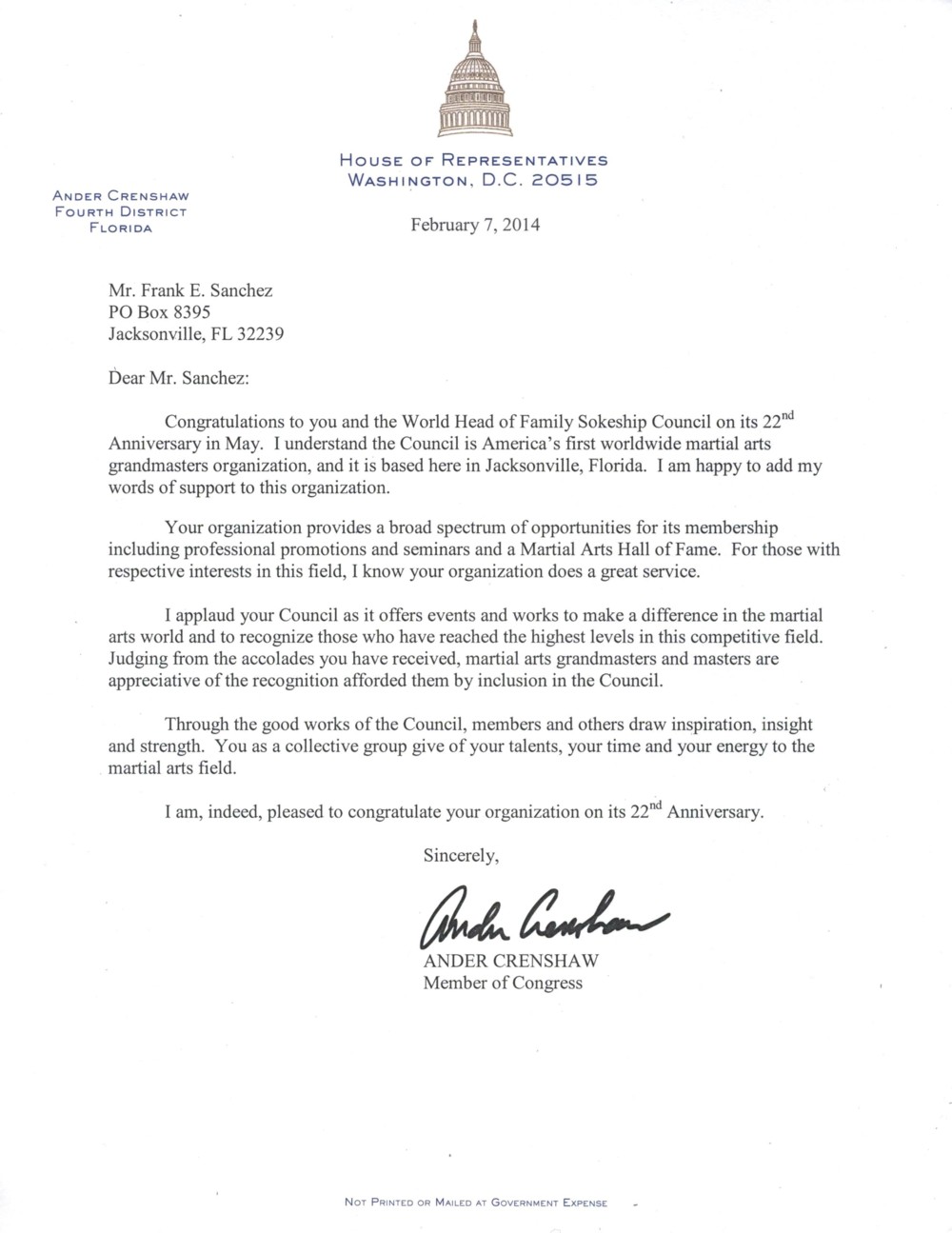 NOTE: Letter of congratulations sent in reference to the WHFSC's 22nd Anniversary in 2014 by then Republican Senator, the Honorable Ander Crenshaw. 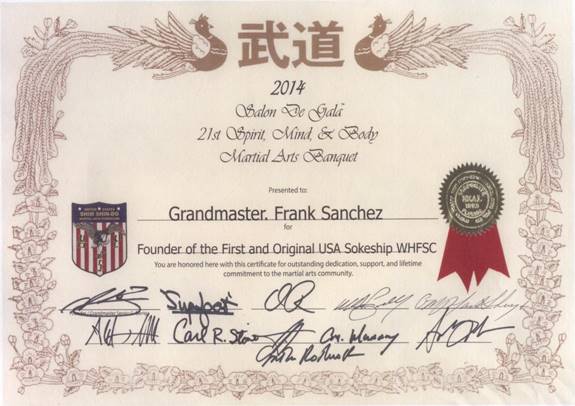 On the council aka WHFSC?

Over the past 30 odd years, I have been asked and inducted to many of the organizations claiming to be the best of the best for Councils of Professors, Master, Grandmaster and Founders. Many to this day are not in existence anymore and those that are, are balancing on a thin wire. While those that claim to be organizations of integrity, time and time again, they fall by the way side to the one and only World Head of Family Sokeship Council. Why?

This organization stems from a humble beginning when it was founded in 1992 by the internationally known and respected grandmaster of San-Jitsu, Frank E. Sanchez. It has the greatest collection of prominent and elite practitioner of the martial arts. All members are screened, investigated and grilled for authenticity and the greatest asset emerges are the caliber of its members. Every year they have an annual "Gathering of the Eagles" where over 250 Grandmasters meet in Orlando, Florida to promote the growth of the martial arts. Integrity, honor and loyalty to the martial arts are alive and the sprite of camaraderie is obvious in THIS council.

I speak for my son Mark and myself. We are honored to belong to the best of the best and members of the Council.

Al Dacascos; GM
Mark Dacascos; Professor
Honored to receive mention by one of my mentors, Soke Frank Sanchez, in the September 2010 Edition of the World Grandmasters Council Newsletter. Having traveled to Russia with Professor Sanchez to train Spetsnaz nearly a decade ago, it is a privilege to receive this recognition from a gentleman who has unified the martial art world through his tireless efforts.

You are welcome to add my testimonial should you choose. As many of you know, I started in 1949 and received my 10th Dan from my sensei Kenjiro Kawanabe, direct disciple of the founder of Shotokan/ Shotokai Karate, Gichen Funakoshi Sensei. I was awarded this in Japan. This is my 61st year in the Art. My dojos are the "Legend Shotokan Karate" Worldwide and still going strong

When I was invited to join the SOKESHIP Council I had reservations, but on going there I saw many of my old friends like Peter Urban, Rico Guy, Joe Onopa, Harold Long, Gary Alexander, Don Nagel……Ronnie Van Clief, and so many great names that I was overwhelmed. It was a GREAT turn out and one I can honestly say has never been done before. Grandmaster Sanchez united every division of every art in the world of egos, and made us all equal as brothers under one flag. That was a miracle. I am proud to have the title along with my many brothers as SOKE

I apologize for the lateness in responding……
I feel fortunate to be a part of the World Head of Family Sokeship Council, a reputable and genuine organization. It is comprised of dedicated and knowledgeable martial artist who have spent decades developing their skill and possess a passion for sharing their martial arts principles and styles with the world. It is an honor to be a member.

MAY YOU GO FROM STRENGTH TO STRENGTH

HELLO TO YOU GRAND MASTER SANCHEZ, ITS GREAT TO HEAR FROM YOU BROTHER!
WE ARE ALL DOING JUST FINE HERE IN THE LAND DOWN-UNDER, THANKYOU!
THERE IS ABSOLUTELY NO DOUBT ABOUT THE QUALITY MARTIAL ARTISTS THAT YOU HAVE IN YOUR EXCELLENT ORGANISATION! YOU MUST FEEL SO PROUD TO HAVE THESE AWESOME MARTIAL ARTISTS ON BOARD!
THESE ARE THE WORDS FROM SUPREME GRAND MASTER CIRIACO 'CACOY' CANETE:
"I've learned from a very young age that it is important to move with the force, and to never resist against an opponent's attack, so I'll just try go with their force and then redirect their own energy back onto themself, so that it actually disperses their force of attack!"

With regards and respect from,

Brother Frank,
My opinion of the World Head of Family Sokeship Council is that it is the best organization of its type. The WHFSC is the only organization that actually investigates their members on their ranks, qualifications and lineage. The WHFSC is my family of founders, pioneers and masters in the world. It is my honor and pleasure to be a member of the WHFSC. The WHFSC represents what I got into the martial arts. HONOR, RESPECT, DIVERSITY, MASTERY, SPIRITUAL AND REGAL. GM Frank Sanchez is to be commended for his organization WHFSC, he is the founder, pioneer and grandmaster...He is also my brother! Thanks for everything! 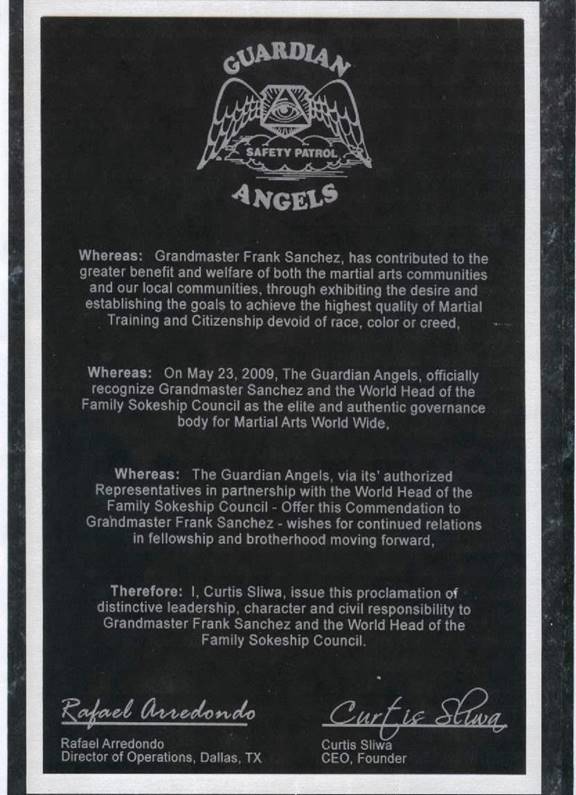 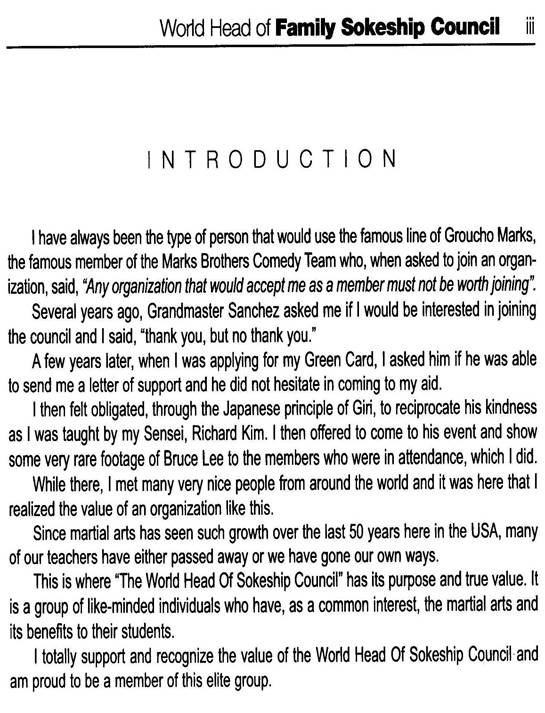 NOTE: Don Warrener's Intro for the 2008 book written by him called "The World Head of Family Sokeship Council" 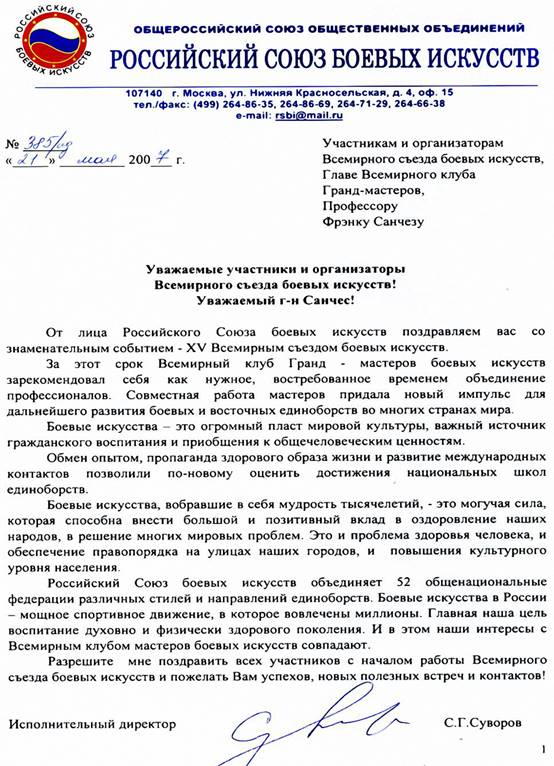 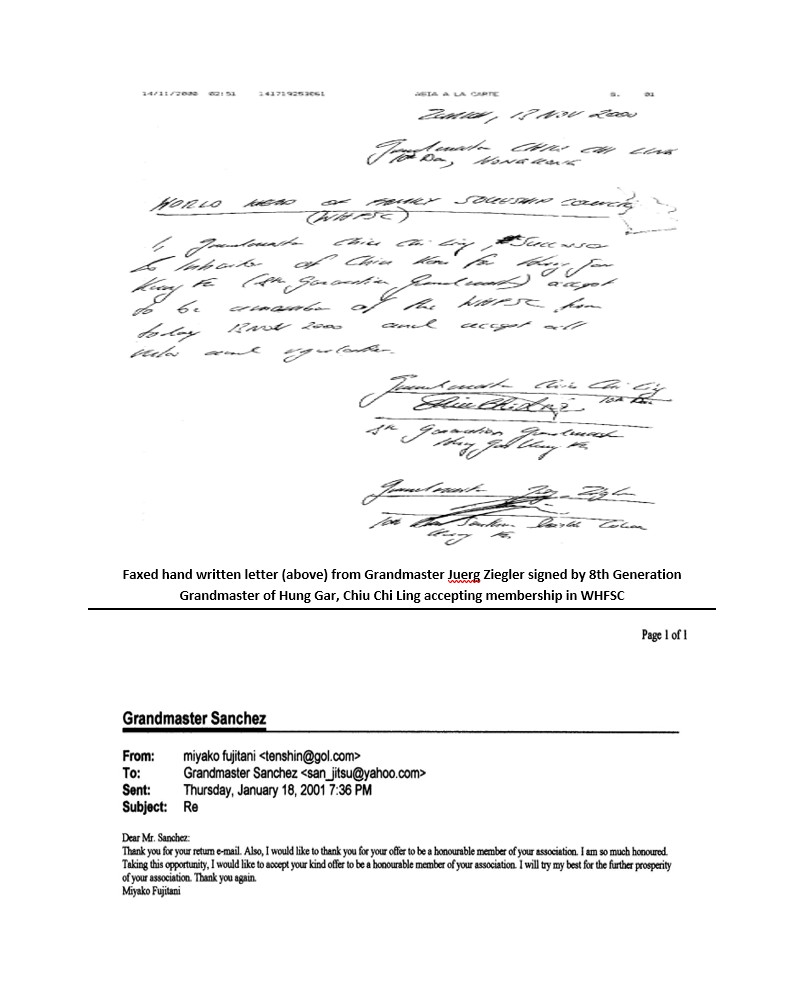 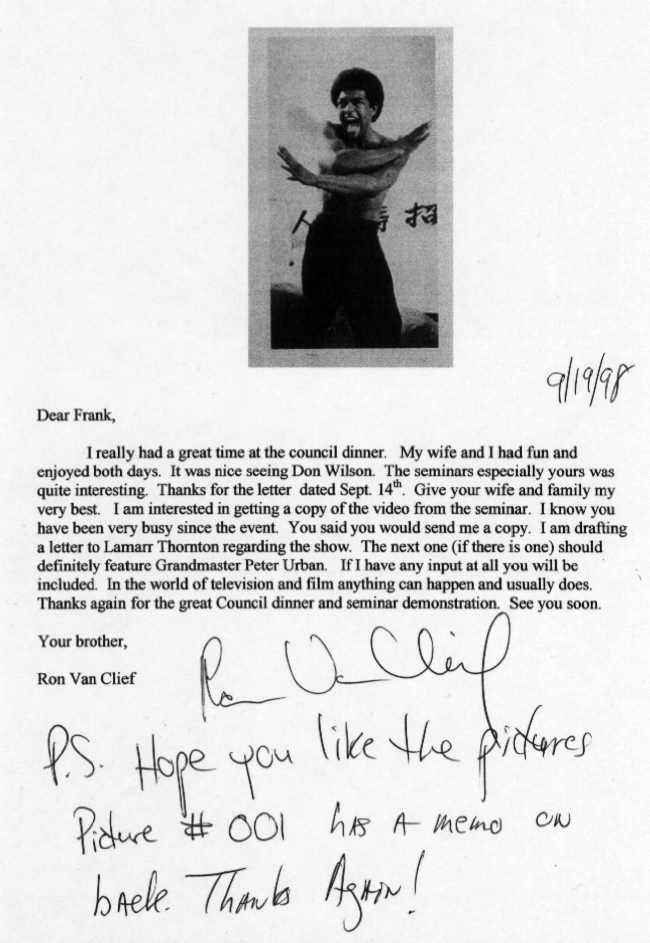 NOTE: Letter was written prior to Professor Jay finally deciding to designate his Son, Leon Jay to be the sole inheritor/ Soke Dai for Small Circle JuJitsu shortly before his passing. 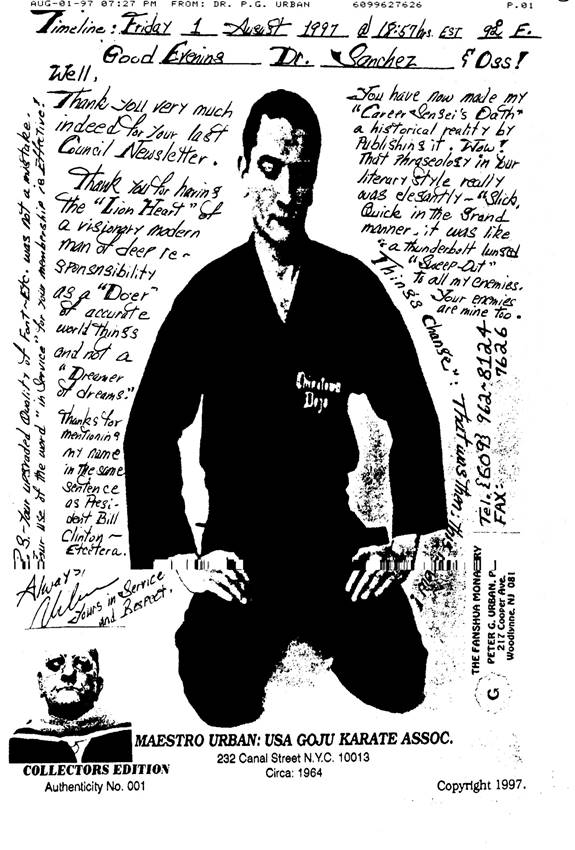 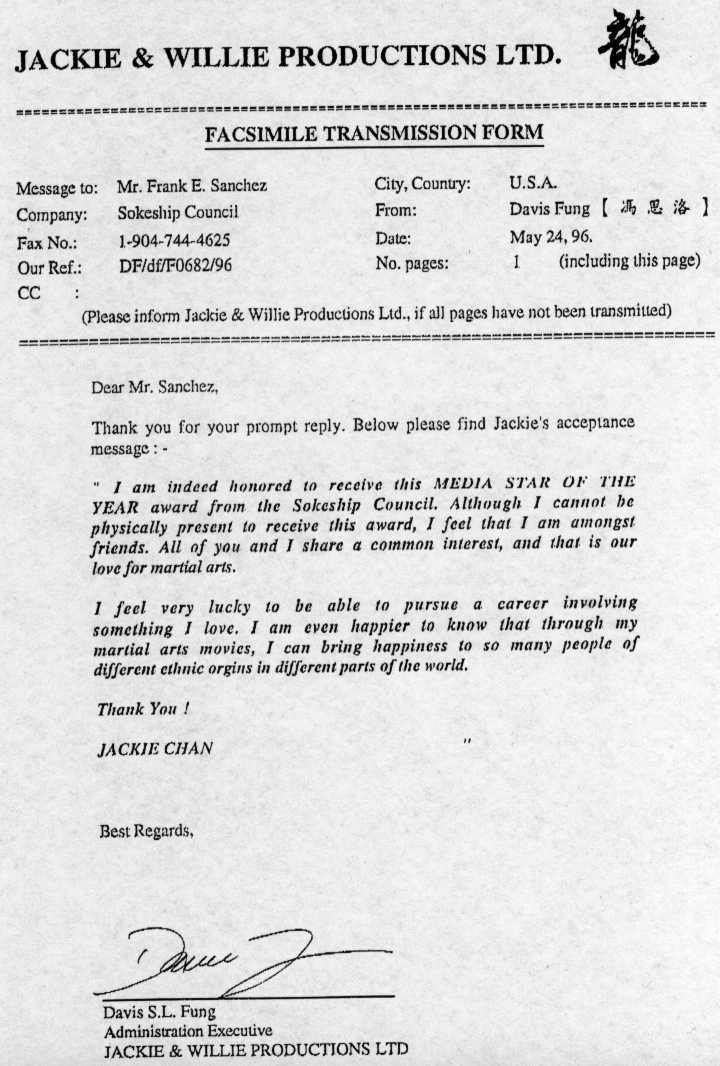 NOTE: Dr. Beasley's organization was one of the organizations that Sanchez joined after coming from Guam to Florida and prior to starting the WHFSC.